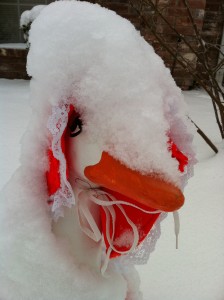 Strand Theory continues to be a lively fun discourse. Whether you believe one goes after one’s hedge’s or not in direct relationship to their personality I stand vindicated on this topic. Control issues aside hold your horses on pruning too early! The goose girl’s are frozen stiff as you see and are peaking out to see if there is any end in sight!

This week in Dallas the ice started falling Monday night and continued all that night layer upon layer. We have not seen temperatures out of the 20’s since Monday night.

It’s cheating a little I tossed in a picture of my sister-in-law shoveling snow in Salem Wisconsin. We don’t shovel snow in Dallas we wait for it to melt.Â  So on Thursday, it started snowing on top of the ice layers and we had to import snow plows from West Texas to try and clear the roads. This is all occurring the week Dallas is gearing up for the Super Bowl. I know many of you have seen football games televised from Cowboy StadiumÂ  http://cowboystadium.com/

Until you see it in person you cannot imagine the structure. When I toured the stadium the tour guide informed us Cowboy Stadium is the largest domed stadium in the world, has the world’s largest column-free interior and the largest high definition video screen which hangs from 20 yard line to 20 yard line and cost more than the old Cowboy Stadium they replaced! It seats 100,000 people. Can you imagine bringing in 100,000 people with this weather and the airports closed much of the week? This number does not include the world media, and the shear volumes it must take to feed, house & entertain this number of visitors.

I also thought you would love to see the various stages of the hybrid tea Rosie O’Donnell that I took shots of Christmas Eve, New Years Day as that magnificent bloom began to fade.

This has been your Super Bowl weather update live from Gaga’s Garden in Plano. Hold off on your pruning. 🙂

7 Replies to “Live from Gagasgarden”