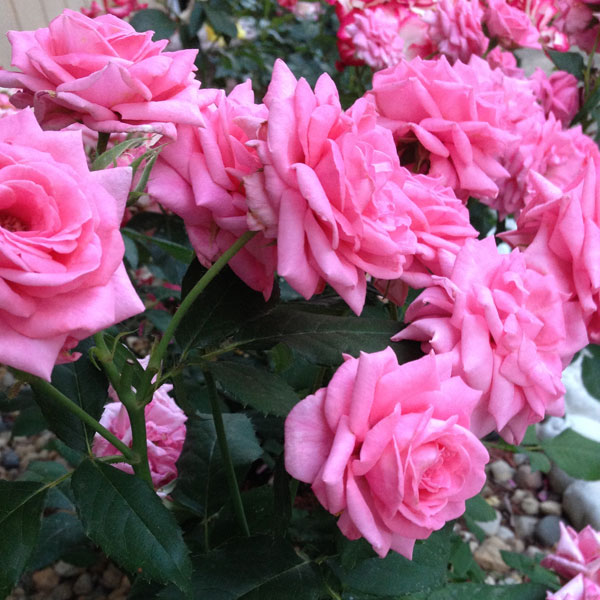 You too can start over.

Anybody can start over. You may not go willingly, but once you set your mind to it, the change may be filled with new opportunities. We moved to Illinois from Texas in 2011 leaving behind rose gardens that I had invested heart and soul creating. The Illinois property sits on 3 1/2 acres of rolling sandy loam hills, and did not have a single rose. We left behind over 225 roses in Plano, TexasÂ (the safest city in America of its size unless you’re my kidnapped lawn decorations)Â that took 20 years to collect. I now live 40 miles from Starbucks and 80 miles from Home Depot.Â Â Whoever does Home Depot’s site planning must be sitting in Salem, Oregon studying their data viewing ‘flyover’ states as not worth a little road trip because this area is booming and could easily supply Home Depot with lots of business.

From 3 minutes from a Starbucks to 40 miles

Now after living in Plano, Texas; a totally consumer centric life style driven by hopping in the car for a 3 minute drive to Starbucks for coffee, Whole Foods, and Central Market type of living to being 15 miles from a Walmart, I’ve come to love it. My aunt that lived in the Santa Ynez wine country had city councils fight to keep big box stores and consumerism out of their counties, we live that way for free. You see this is farm country, we grow corn and soy beans out here. Susan what’s your point? They don’t sell potted fancy rose bushes out here either. Can you imagine my shock trying to find a landscape center that sold potted hybrid teas? I called the nearest landscape center 40 miles away and asked if they carried hybrid teas and the answer to my question was “what’s that?”. You see there are trade-offs.

Come To ‘Papa’! ‘Papa Floribunda’ ‘Gene Boerner’ That Is

We started over in Illinois, June, 2011 walking you through putting in new rose gardens in stages. So now you see why when I spotted ‘Gene Boerner’ at Rural King, in September of 2011 I was shocked and nearly shed a tear. They carry primarilyÂ  Star Roses ‘KnockOutÂ®’ roses, which I love also but I wanted more than only ‘KnockOuts’Â®. They had very little selection in hybrid tea or floribunda roses, so to see one ‘Gene Boerner’ which has a stellar reputation and came out in 1968 and is still rated in the ARS* Handbook of Selecting Roses an 8.2 I grabbed it and planted it as the first floribunda in my Illinois floribunda garden. Once I looked up the history of ‘who is Gene Boehner’ the irony wasn’t lost on me. ‘Gene Boehner’ is known as ‘Papa Floribunda’. A jovial man he worked his entire life at Jackson & Perkins where he hybridized more than 60 roses! I’m so glad the first rose in our floribunda rose garden was ‘Gene Boerner.’ Known as ‘Papa Floribunda’ of Jackson & Perkins ‘Gene Boerner’ is symbolic to me for many reasons. Jackson & Perkins is a brand that is symbolic to America for roses. Also ‘Gene Boerner’ you see pictured here is one of the first roses to bloom each spring. This rose is also very disease resistant.

Garden Legends are stories about people, plants, & companies and how their passion for creating better, more beautiful, easy to grow plants will live on as a tribute to them by rooting and grounding beautiful plants across the land in the hearts and gardens of people everywhere. Along with Gene Boerner, two of the most notable American Rose Breeders; Bill Warriner often called “the No.1 rose breeder in the United States and Dr. Keith Zary have created the most famous roses today while at Jackson & Perkins.

He later won 19 All-America awards for his rose introductions still while working on Jackson & Perkins hybrids.

His hybridizing accomplishments were outstanding. In his job as overseer of some 100,000 seedlings in the Jackson & Perkins research facility in Irvine, CA where he developed new rose strains, he became the only rose hybridizer in the 40-year-old All-American Rose Society to win All-American honors for three new breeds, Love, Honor and Cherish, in one year, 1980. I planted all three in my Plano, Texas garden.

Bill Warriner retired as director of Jackson & Perkins research after working with the company for 25 years and developing 150 varieties of roses! His creations have continued to gain prestige since his retirement. Bill Warriner passed away at the age of 69 in 1991.

Dr. Zary is only the second US rose breeder to win the President’s International Trophy (PIT) and Gold Medal Award of the Royal National Rose Society. The rose that won is called ‘Greetings’, a white centered, purple shrub/landscape-type rose that is currently not available in the US, but is sold in England.

Another one of the first roses I planted in the Illinois floribunda garden is a rose exclusive to Jackson & Perkins called ‘Kimberlina’ bred by Dr. Keith Zary. Why is this important to you? Because we want you to be successful with the roses you buy and plant. The American Rose Society requested we review some roses Here’s the video http://

If you want lush candelabras of roses, rapid bloom cycles, and a rose garden to enjoy for color and the joy of being in your own rose garden you want floribundas.

Here are the roses of the 2016 season that are the first to bloom: with a video of ‘Kimberlina’ to show hundreds if not a thousand buds ready to burst into bloom for the rose blooming season of 2016:

Benefits of The American Rose Society

If you haven’t checked out theÂ American Rose Society, current President of the American Rose Society, Pat Shanley believes in sustainable rose gardening and is dedicated to every aspect to growing better roses. She also oversees the magazine the “American Rose” magazine, along with Executive Director, Laura Seabaugh. This magazine is completely dedicated to promoting gardening, education, preservation and appreciation of the rose. The American Rose Society isÂ one of the few societies left that continues to publish a print publication 6 times a year along with several newsletters/bulletins and provides each member with a “Handbook for Selecting Roses” and “Creating a Beautiful Rose Garden” booklet.Â
Former president & rose education advocate Jolene Adams believes that the only way to dispel the myth that roses are difficult to grow is rose growing education. The American Rose Society is dedicated to providing you the gardener with education on how to grow better roses. If you haven’t check them out. Rosarians are standing by to answer your questions.Â Rose.orgÂ Save