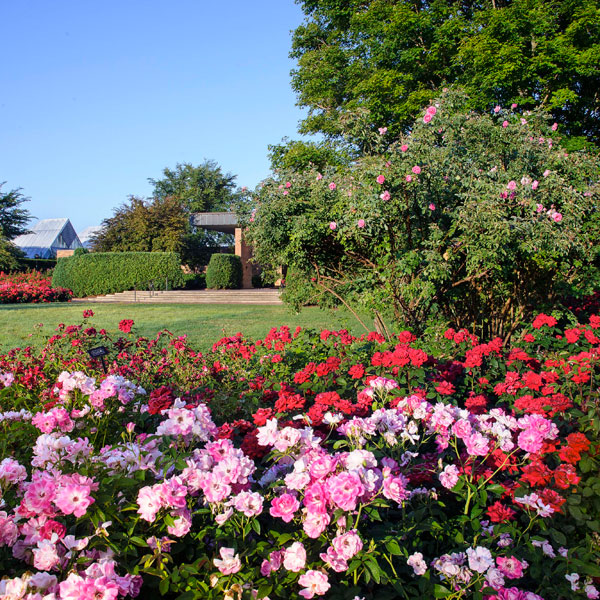 Rose Gardens Across The USA

FUN FACT 2:Â In 1986 President Ronald Reagan signed Proclamation 5574, which made the rose the National Floral Emblem. The document contained these words: â€œMore often than any other flower, we hold the rose dear as the symbol of life and love and devotion, of beauty and eternity.â€

FUN FACT 3:Â Roses are the official flower of the District of Columbia, as well as the states of Georgia, Iowa, New York and North Dakota.

FUN FACT 5:Â The rose is the favorite flower of 85 percent of Americans.

FUN FACT 6:Â Thousands of songs have been sung about roses, including, â€œRed Roses for a Blue Lady,â€ â€œRamblinâ€™ Rose,â€ â€œMy Wild Irish Rose,â€ â€œEverythingâ€™s Cominâ€™ Up Roses,â€ â€œYellow Rose of Texas,â€ â€œDays of Wine and Roses,â€ and, of course, â€œMama Liked the Roses,â€ a song recorded by Elvis Presley in 1969.

FUN FACT 7:Â A fossilized imprint of a rose was discovered in Florissant, CO. Its estimated age: about 40 millIn Indiana, the fourth week of June has been designated as â€œA Rose for Friendship Week.â€

FUN FACT 9:Â William Shakespeare referred to roses more than 50 times, including, â€œA rose by any other name would smell as sweet.â€

FUN FACT 10:Â The War of the Roses was a face-off between two families who wanted to control England: The House of Lancaster, which used a red rose on its family crest, and the House of York, whose symbol was a white rose.

FUN FACT 11:Â The Tournament of Roses began in 1890 as a festival. In 1902, a football game was added for entertainment.

FUN FACT 12:Â Red roses became the official flower of the Kentucky Derby in 1904. The phrase â€œRun for the Rosesâ€ was first used in 1925.*